The early European settlers were the first to bring dairy cows into the Western Districts. In 1844 when James Dawson purchased Cox’ s Heifer Station (later known as Kangatong), he wrote that he had bought a mixed herd of dairy cows and commenced to make butter and cheese.

In 1860 John Orlebar introduced American Factory methods to a cheese factory at Allansford which meant that the milk was delivered to the factory and cheese making was done there rather than on farm. Butter was different as it stood for long periods in wide shallow pans from which the cream was skimmed off by hand (separation), then churned. Contamination was a problem in addition to the warm Australian weather, quickly spoiling the butter.

The first shipment of Victorian butter to London was fit only for axel grease. The only way to ship butter any distance was to heavily salt it. This was known as potted butter. The Melbourne Milk Supply company revolutionized the making of butter in 1882 with the first mechanical milk separator in Victoria at Romsey.

By the mid eighties separation was widespread and the dairy industry started to proliferate with the introduction of creameries where the process of separation took place. Farmers delivered their milk to the creameries and took home the skim milk to feed pigs. Cream was then sent on to central butter making factories.

When hand separators became common farmers did their own separating and saved on transport costs. So profitable had dairying become that in 1887 the average value of a milch (milk) cow in full profit (production) was £10.

In 1892 the Koroit and Tower Hill Butter and Cheese Factory Company began to buy milk on butterfat content (using the Babcock test to measure milk fat). Buying milk based on butter fat created a standard value for the industry.

During the same year the Hamilton and District Butter Factory asked the Shire of Mount Rouse (Penshurst) for permission to lay water pipes from the Spring to the Creamery on Chesswass Street and for French Street, to be extended north to the creamery.

A second revolution for the dairying industry was the dual introduction of refrigeration and Government assistance to establish butter factories across Victoria including Hamilton and Penshurst. These factories marketed the butter to Melbourne and Britain. The dairy industry expanded rapidly -by 1895 there were two hundred butter factories and three hundred creameries in Victoria.

In the 1890’s many larger station estates were sub-divided and developed into smaller dairying holdings because of the depression in sheep and wool prices. This included 1300 acres of Condah Swamp (drained and subdivided) and 1200 acres of Meadowlands (Buckley Swamp). Other stations which subdivided into smaller dairying lots, included parts of Cheviot Hills, Kolor, Langulac and Gazette. Most of these lots were leased out, although some were later sold (e.g. north and south Kolor). 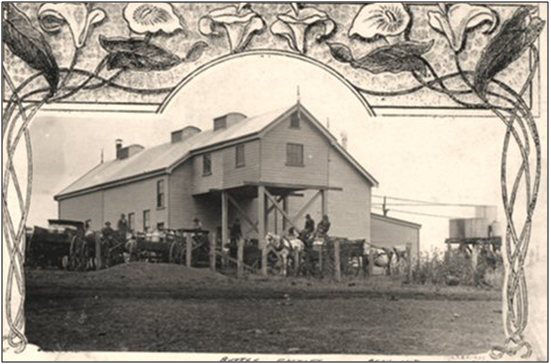 The operations of the Penshurst Butter Factory commenced on 2 August 1899. The first payment to the suppliers was made 12 September 1899 at the rate of seven pence per pound of butterfat. In September 1899 the directors purchased the Croxton creamery from the Hamilton company.

The Penshurst factory started with seventy-eight shareholders mostly farmers, graziers and businessmen from Croxton East and Penshurst. According to the records some of the shareholders listed included:

In 1902 my grandfather Patrick Doherty and his wife’s brothers (the Noonans) moved from Terang (where they were dairying) to lease dairy farms on the Kolor Estate. The following year they joined the Penshurst Butter Factory as shareholders.

In a few short years there were enough dairy farmers in the district to field their own football team. This team was known as the Dairymen and/or the Milky Whites who played against the Penshurst Club for the Dorney Trophy.

In February 1907 a demonstration of a milking machine was held in Penshurst. Nearly every dairy farmer in the district attended. Despite the availability of milking machines Vin Doherty recalled that in the mid-1920’s, as a young school boy, he and his brothers were still hand milking dairy cows prior to riding their ponies to the South Kolor school each day.

In 1910 cream was supplied to the Penshurst Butter factory from as far away as Willaura, Dunkeld, Cavendish, Hamilton and Balmoral.

Dairying was a major contributor to the demographic growth of Penshurst and the surrounding locale. For example in the 1914-1918 First World War there were over one hundred and forty enlistments from Penshurst and district.

In 1966 the Penshurst Butter Factory shareholders accepted an offer to merge with Murray Goulburn.

In the Centre of the Fertile Western District of Victoria, Mount Rouse Centenary Celebrated, booklet (1964)

Yule P.L (1988) From Forest, Swamp and Stones - A history of the Shire of Minhamite, Warrnambool institute Press, Victoria.