Ellenor Hyde was born at Penshurst on the 27th September 1877. Ellenor married James William Daintry Kekwick in 1903 and they had one son, Daintrey Ned Kekwick who was born in 1905. She was divorced on the 23rd August 1917.

“Divorce Court.-Yesterday before the Chief Justice (Sir. Robert McMillan), James William Dainity Kekwick petitioned for the dissolution of his marriage with Ellener Kekwick, on the grounds of desertion. The evidence showed that the parties were married in 1903, and that six years later the respondent left her home and had not since returned, despite efforts made by the petitioner to bring about reconciliation A decree nisi was granted.”

Ellenor Hyde (she used her maiden name) signed up for the Australian Army Nursing Service on the 28th June 1918, at the age of 41 years. She was called up on the 14th October 1918 by which time the war was over, however the massive logistical task of bringing everyone home was about to begin.

November 1918. Her postings were the 31st and 27th General Hospitals at Abbassia from the 23rd November until the 27th January 1919. 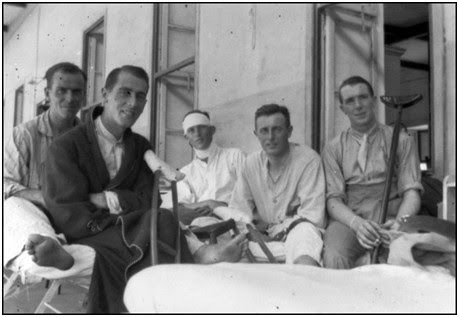 In the book “The Australian Army Medical Corps in Egypt. Written by James W. Barrett”. These observations were made.

“A word must be said on the subject of discipline and its influence on Australians. The bravery and resourcefulness of Australians in the field are sufficiently attested by those competent to judge. Of their splendid behaviour when desperately injured we have had ample evidence, which we furnish with proper respect to brave men.

The convalescent Australian presents another problem, as also does the soldier waiting at the base. The lines in Dr. Watts's hymn come to mind. In these circumstances his very fine qualities cause him to give trouble. His ingenuity in breaking bounds is worthy of a better cause.

For example, there were complaints from the military police that sick men were roaming about Cairo at night. The roll was called at No. 1 General Hospital several times, and no one was absent. Not quite satisfied, we called the roll in the Ophthalmic Ward one evening at 8 p.m. Only one man was absent. Still suspicious, we called it again at 8.40 p.m. the same evening, and twenty-one men had gone. Some had rolled up coats or blankets and so placed them that it seemed that the men were still in bed. Subsequently uniforms that should have been in the pack store were discovered under their mattresses.

These and similar difficulties were aggravated by the fact that even a moderate disciplinarian did not always receive the support of the nurses or even the medical officers.

To illustrate: An endeavour was made to limit smoking in the wards to reasonable hours, as it has become an unfortunate tradition that a sick soldier may smoke cigarettes all day long, when in bed, without injury.

One of us (J. W. B.) entered a small ward which was filled with smoke, and was just in time to see a sick man practically blowing smoke into a nurse's face; needless to say the cigarette vanished with astonishing rapidity. Looking through the murky atmosphere, I asked the nurse whether she had seen any one smoking, to which she unblushingly replied, "No, sir."

If nurses and a section of officers throw their weight against enforcement of discipline, because they don't think it necessary or right, the difficulties become considerable.

Again, the sentries were often in collusion with the men. Two instances suffice: A soldier got out of the hospital through a hole in the fence. On returning he determined to test the sentry with an eye to future escapades. Walking up to the gate, he said, "I want to visit a friend." "Have you got a pass?" said the sentry. "No," replied the sick man. A discussion followed, and finally the sentry said, "Go in and out by the hole in the fence; it will save me a lot of trouble."

Ellenor left the 27th General Hospital on the 27th January 1919 and moved to the 14th AGH. She was detached from there to the Government Inf Hospital. She finally left Egypt at Kantara on the 2nd August 1919 and returned to Australia aboard the “HT Delta”.

After her return to Western Australia she opened a Convalescents home as this newspaper article shows.

While Hospitals of various kinds exist in the metropolitan area, it is more than passing strange that for so long no one conceived the idea of supplying a heartfelt want in the shape of a rest home with a system of sympathetic nursing of the temporarily feeble and those convalescing from sickness.

When one is ill an hospital is undoubtedly the proper place in which to repose. However when illness has been shaken off and former strength is being gradually coaxed back, there is always that feeling of repugnance to hospitals, no matter how sympathetic the nursing or untiring the attention. One longs for more congenial surroundings beneath a roof where the sombre shrouds of sickness do not hang. Many a person, too, rundown and temporarily out of sorts, and feeling the need of a rest, because there is no actual rest home often enters an hospital, whereas all that is needed is a change of environment and the benefit of expert advice and careful nursing to buck up spirits and readjust loosened nerves.

Such a home is now an accomplished fact Mrs. Kekwick, a nurse of many years experience, is attempting to solve the problem of a proper place for such cases. A chat which a representative of this paper had with the lady, gives some idea of the raison d'etre of her venture.

Mrs. Kekwick (formerly known as Sister Hyde) a few months ago returned from service with the A.LF, and the experience she gained abroad will stand her in good stead. There is no branch of the nursing profession that she is not conversant with, and the idea she has in mind and which she has outlined to us suggests that her home is going to be a boon to the temporarily feeble and rundown.

"My idea." remarked the lady, "is a rest home on the lines of the Sanataria in New South Wales. I have acquired Dr. Wright's commodious residence at Buckland Hill, and equipped it with every known modern requirement for a rest home. It is admirably situated for a home of the kind. ‘Mon Repos’ (shown below) as the place is known, is only a mile and three quarters from Cottesloe Beach, and about 200ft. above the Swan River, of which one gets a splendid view from the house and grounds. It is away from the noise and dust and other annoyances, incidental to a town. " 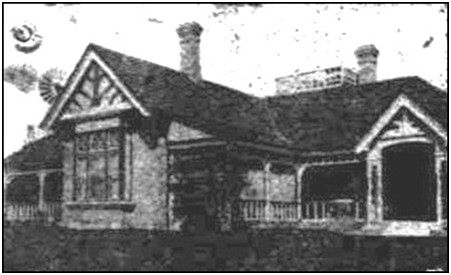 "Very. It is restful and has everything to make one healthy, nice and high, and the surroundings are lovely. The house-stands on about two-acres of land, amid well-laid out gardens, lawns, tennis court and smaller sundry spaces for other out-door games.

“You are not restricting the place to patients convalescing after sickness?”

"Oh, no; I am prepared to accept anyone who is in indifferent health not only those who have just left a bed of sickness, but also the temporarily depressed, unstrung, or out of sorts. You know many people who are off-colour sometimes go into hospital, when, really, all they need is a brief spell away from the noise and bustle and to have careful nursing.

You mean to make the place a building-up rendezvous?

“Exactly. And what better spot could I have selected? The house, besides being favourably situated, is elaborate and comfortably furnished. Provision is made for both in and outdoor recreation, which will serve to build up a person. There is music, sitting, reception and sun rooms, ample veranda space for rest and sleeping out, while out of doors is the tennis court, a boatshed, and bathing facilities in the river. The grounds are spacious, and there are certainly few if any, spots in the State affording a better view than that to be obtained from the high ground in the vicinity."

There'll be no restriction on the movements of patients?

"None whatever. Everybody who comes to the home is at liberty to come and go wherever the whim takes them. There's plenty of room for walks."

How about room in the building?

"That is my only trouble at the moment. So that there may be privacy and comfort, I do not propose for a while, anyway, to have more than about a dozen patients at a time. Should the demand warrant it I'll make extensions. Unfortunately, I cannot accept children."

And what will be the system of treatment?

"That is a matter to which I have given a lot of thought. Scenery and pleasing surroundings are not the only things essential to winning back health and strength. These are wasted unless careful and sympathetic nursing and attention are given individual wants. Another point I stress is the studying and carrying out to the absolute letter, the wishes of guests and their medical advisers. My long nursing experience has taught me the wisdom and absolute necessity of this."

The scheme which Mrs. Kekwick is launching should win popular approval. Indeed after listening to what is being done for people at the home, one would almost like to be "off colour" so as to be able to sample the luxuries provided. But, then, the advantages and facilities for winning back health would mean an all-too-early evacuation.

Ellenor sold the property in 1936.

Mon Repos, a number of improved and unimproved residential sites, and land near Mt. Helena were among property sales disclosed this week.

Mon Repos, in Duffield Street, Buckland Hill, which has been used as a convalescent home for many years, was sold by Mrs. E. Kekwick to an undisclosed buyer for over £3,000. The land, which has a frontage of about 152ft. and a depth of about 600ft. to the river, carries a single storey tile roof stone building containing about 12 rooms. The sale was completed through the agency of Robertson Bros Ltd.

Ellenor (Hyde) Kekwick passed away on the 15th May 1952 and is buried at Karrakatta Cemetery Crematorium Rose Gardens 4C 0055.

Ellenor must have been very proud of her son Daintrey Ned Kekwick when he became a Doctor (M. B – B.S) in 1942 at Adelaide.

He served in the Army as a Doctor from 1st February 1943 till 1st August 1947. He served as SX 19133 Captain Kekwick. He served overseas in New Guinea and New Britian. He also served in the Royal Australian Navy after WW2 as a Surgeon Lieutenant from 1st August 1947 till his appointment was terminated on the 9th December 1953. It was alleged that he was terminated due to an alleged civilian offence in April 1953. (He was later acquitted of the charges).