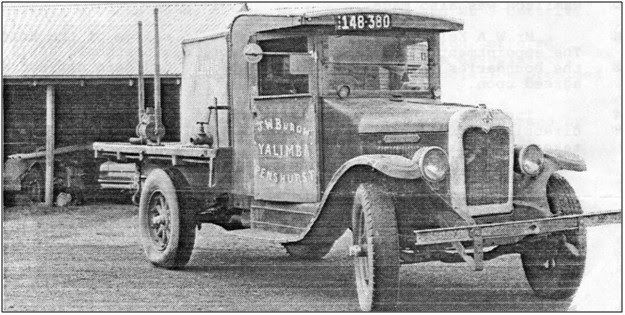 During the summer of 1935-36, large areas of the Western District were devastated by bush and grass fires. A public meeting was convened by Messrs W.A. Olle, J. C. Pelchen and A. D. McDonald, on 16th March, 1936. The meeting was attended by 80 landowners and townspeople; consequently, on the motion of Mr. E. R. Twomey, “The Penshurst Bush Fire Brigade” was formed. The office bearers were as follows:

Mr. W. A. Kelly was appointed Captain in charge of the Brigade. The appointment of Lieutenants, however, was postponed until the boundaries of the newly formed Brigade had been defined and agreed upon.

The area to be covered extended six to seven miles in all directions from Penshurst, with irregular boundary lines to take in several large holdings.

On the 2nd April, 1936, a committee meeting was held to determine the area boundaries and elect appropriate Lieutenants. Messrs. W. A. Olle and P. Mirtschin moved that the territories be:

Lieutenants for these areas were as follows

Revenue for the Brigade was to be secured by annual, voluntary, subscription based on a levy of one penny in the pound on the annual Shire of Mt. Rouse nett annual valuation with a minimum of two shillings and sixpence. In 1940, a Shire grant of fifty pounds allowed membership to be reduced to two shillings.

The following-gentlemen indicated their willingness to guarantee up to £100.00 for the purchase of useful equipment pending the receipt of this revenue:

One month later, the committee purchased for each of its five areas, low down pumps, cannisters, full basil beaters, torches and axes. Four 200 gallon square tanks were purchased with two extras being volunteered by Mr. W. E. Burger and also Mr. L. R. Presser. The tanks were to be transported to fires by privately owned vehicles.

In a fire emergency, all volunteers were to meet at the Post Office and transported to the fire in vehicles volunteered for this purpose by Mr. N. Fry, Mr. H. P. Burrows and Mr. S. Cottrill.

In January of 1937 Heine and Wade of Hamilton, offered to supply a truck and engine driven pump for the Association. This offer was made on the proviso that the Association provided the tank and hoses.

A year later, it was decided that a truck be purchased by the local brigade. On 11th February, 1938, the truck was purchased from T. W. Hill Motors for £85.00. Mr. N. Menzel, gar­age proprietor maintained the truck in going order. The truck was garaged at Menzel’s Garage. The eagerness of the volunteers was dem­onstrated when Menzel’s garage doors were damaged in getting the truck out for a fire which destroyed Mr. J. A. Briggs block of shops on 15th January, 1940. The Brigade offered to pay for the repairs!!

Late in that year, the truck was transferred to Schramm’s Garage for housing. A power pump was authorised for the truck and conversion of the vehicle was made in July 1940.

The Methodist Church bell, with Mr. Jack Chesswas as ringer, was granted for use as a fire alarm in 1942.The Air Raid siren was retained for fire use after December, 1945. Applic­ation was made for an electric siren for the fire station in September, 1953.

The Second World War brought changes to the Brigade. Due to petrol rationing, gas producers were used by motor vehicles. This equipment caused many fires and as a consequence, the residents of Croxton East requested the formation of a local brigade. Permission for this was granted by the Penshurst Bush Fire Brigade Committee. The area had 10 privately owned vehicles which were listed against Military impressments; that is they were registered as local emergency vehicles; prevent­ing them being commandeered by the Army. This was the first break from the original boundary. The need for co-operation and co-ordination between the brigades became essential due to war time restriction on equipment and diminished man power.

On the 25th August, 1943, a meeting was held in the Council Chambers for the purpose of forming a Bush Fire Brigade Group.

The need for co-operation and co-ordination between the brigades became essential due to war time restriction on equipment and diminished man power.

On the 25th August, 1943, a meeting was held in the Council Chambers for the purpose of forming a Bush Fire Brigade Group. The following delegates were in attendance: Messrs. Fry and O. Hermann (Penshurst) Messrs Kelly and Tischler (Caramut) Messrs Starling and Toogood (Minhamite) and Messrs J. Huf and Burger (Croxton East). Ten other members of the four brigades were also in attendance.

Mr. Fry was voted to the chair and he thereupon outlined the purpose of the meeting. Mr. Fry moved and Mr. Hermann seconded that a group be formed. It was resolved on the motion of Mr. Starling, and seconded by Mr. Tischler that the name of the group be “The Penshurst and District Bush Fire Brigades Group”

Mr. Tischler moved and Mr. Kelly seconded that the group’s area should be the territory covered by the four brigades.

The office bearers of the Group were:

Commencing at the South Kolor School; extending South West taking in “Stonefield” and “Gazette”stations and then in a line to Mt. Napier and Presser’s Property; then in a North Easterly line taking in “Banemore” “Berrydale” and “Croxton East” Stations; then following along the Shire of Mt. Rouse Boundary North to Chatsworth Road and then East along Chatsworth Road to the Junction; then onto Purdeet taking in “The Gums”, “North Gums” and “Blackwood” Stations to the junction of Muston Creek with the Shire Boundary Road; and continuing along such road to commencing Point.

Meanwhile, the local members had purchased land in June of 1944, next to the National Australia Bank for £110.00. A tender of £267.00 by R. Williams of Hamilton was accepted to erect the building. This was transferred to the C.F.A. on 21st September, 1945. The newly titled Penshurst Rural Fire Brigade was reimbursed £267 by the C.F.A. on bring­ing the fire station under the mantle of the C.F.A. 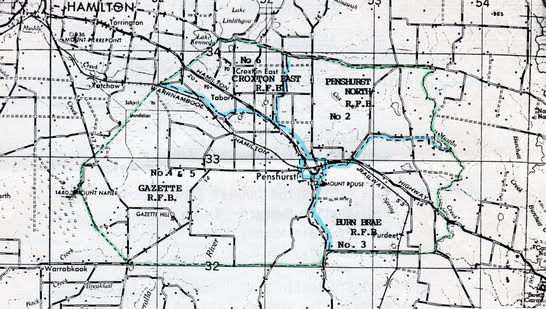 On 27th February, 1947, the first appointment of a Brigade member to the Local Advisory committee was made. Mr. Roy Schramm was this appointee, nominated by the members and approved by the C.F.A.

Nature was utilised in the fight against fire in 1951, when a fire watching look-out was built on top of Mount Rouse, jointly financed by the Shires of Mt. Rouse, Minhamite, Warrnambool and the C.F.A. It is manned over the proclaimed summer period.

The Fire Spotters employed since the construction of the hut were:

Communication from the fire spotter was originally by telephone. Later radio was introduced to streamline the efficiency of this essential service.

The first two way radio was fitted to the urban fire vehicle in 1964. Later when we received a new Austin tanker in 1967, another set was purchased for this unit. The Base station was set up in Schramm’s Service Station and was operated by G. Harders. In 1971, it was transferred to the residence of Mr. Alex Sparks, and Mrs. Mary Sparks held the position of Group Communication Officer for 13 years. The Base station was then operated from the home of Mr. and Mrs. Ian Harrington, Burn Brae.

The life of the present Brigade gives a glimpse of the efforts made over many years to control or eliminate fire danger to life and property. It is topical to note that Shire records of 1851 give graphic accounts of many miles of travel surrounded by bush fires, of seeking safety as the only action possible.

Severe fires of 80 years ago saw a Bush Fire Brigade formed in Penshurst in 1905 when the means of attack consisted mainly of beaters in whatever form one could get their hands on, when the meager supply of manufactured beaters ran out.

Phosphorus deposited on properties was given as the cause of outbreaks in many cases in those days.

The Brigade decided to form an Urban Brigade in January of 1957 and this was duly declared an urban area by the C.F.A. and personnel were elected.

The Southern Grampians Group was formed in September, 1963.

The Brigade has assisted with fires outside the brigade area. These places include: Dartmoor, Heywood, Pigeon Ponds, Mortlake, Minhamite and many others within our Group and neighbouring Groups.

On the 12th February, 1977, approximately 10,000 acres were burned out in one of the Brigades worst fires in 30 years. In 1978, after these fires, the Penshurst Apex Club donated a quick fill pump to the Brigade which has been set up on a trailer with fuel, lights and hoses. This unit has been another asset to the brigade.

Since 1969, the Brigade has competed in the sporting side of Brigade training. The Demonstrations, or as they are known today, Championships, at both regional and State levels. These competitions are a great training exercise, as they teach co­operation, discipline and use of equipment. 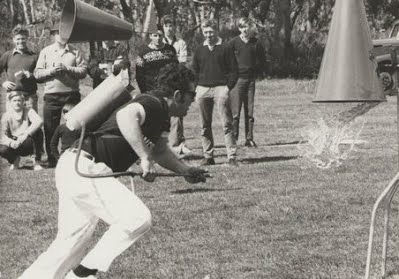 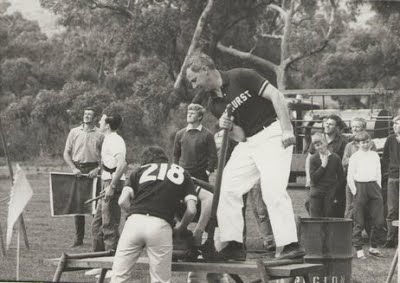 Penshurst Brigade at the demonstrations in Dunkeld, 1969

Each year representatives of the Brigade attend special­ized training courses at Fiskville as well as undertaking Group Training exercises within the Region.

Just what the future holds and what it should hold is a matter of individual opinion and cost.

Elimination of railway services has brought a new and even more dangerous system into being - huge road tankers with highly inflammable and dangerous chemical containers.

Does the future hold the manning of country fire stations with full time personnel qualified and specialists in the fields of chemical control of spillage with the backup of volunteers in case of fires - or is it something we will have to live with - or die with?

VEHICLES OWNED AND USED BY THE PENSHURST RURAL FIRE BRIGADE 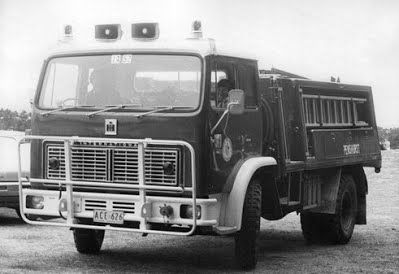 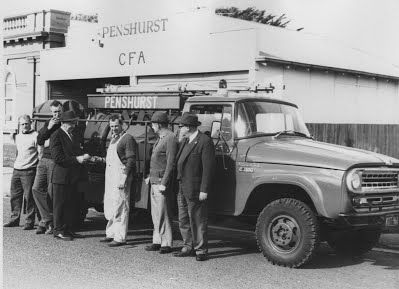 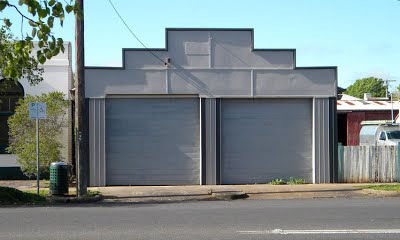 The fire brigade station building as it appears in 2016.

This building, built in 1944 in Bell Street, is no longer in use by the brigade. It was replaced by new headquarters in December 1993. 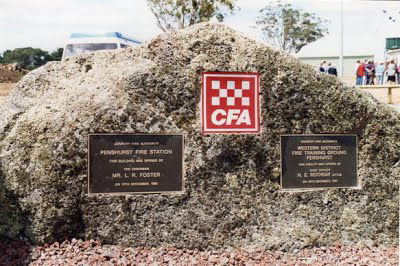