Queen’s South Africa Medal (QSA) 5 bars when he served as a Sergeant (No 1138) in the New South Wales Mounted Rifles, and

The British War and Victory medals WW1 when he served in 14th Battalion, Australian Imperial Force (No. 6733).

On doing some preliminary research on the Gibb family from the Mount Rouse District we found that they are an interesting family indeed.

“Eilyer was originally part of the Bolac Plains run taken up by Gibb’s and Anderson in 1842 and subsequently divided between the partners. Eilyer pastoral run was established in 1846 by Henry Gibb, an important Western District pioneer settler whose grave remains on the property. Josiah and Thomas Austin acquired Eilyer in 1854 after Henrys death in 1853”.

The following is from the Victorian Heritage database: “The history of the Purdeet run is complicated. There seem to have been two of them. Alexander Donaldson lodged a lease application in March 1848 stating that he had occupied the run for four years (Shire of Mount Rouse, 1964). "Caveats against granting the lease to Donaldson were recorded on 8 July 1848 from Matthew Gibb of Patrick's Day run and Edward Bell of Green Hills run. Gibb claimed the station called Purdeet was in his run and belonged to him. Bell made a similar claim." The Caveat Commissioner upheld the protests, ruled that Purdeet did not exist and allocated the land to St Patrick's Day”.

James and Isabella sold their property in Victoria and moved to NSW in 1870 and procured the then unimproved Berthong property in New South Wales. (Berthong is near Young NSW). The farm operated under the name Gibb and Son.

Henry James Gibb married Agnes Augusta Marguerite Watson in Dubbo in 1885. Agnes was born in 1857 and registered at Parramatta.

Henry and Agnes had three children. Harry McIntyre Gibb born in 1886 at Tumut. Cecil Gibb born at Tumut in 1887 and Roy Gibb who was born at Forbes in 1891. It appears that Henry and Agnes were probably living on his father’s property at Talbingo. The following newspaper articles relate to the property.

“Mr. E. G. Brown has recently sold, on behalf of Mrs. Lampe, the upper portion of the "Talbingo run to Mr. James Gibb, of Berthong Station, near Young.”

“This station which has not been very long established belongs to Mr. James Gibb, of Berthong, and in times of scarcity has been of great service in the way already described. Owing to frequent heavy falls of snow it is hardly possible to keep stock on the more exposed portions of the run throughout the winter months, but there is a sheltered part near the Tumut River to which the sheep are removed during the severest period of the weather. The station is managed by Mr. Charles Row, au energetic and capable young man, who was formerly on Wallendbeen and Memagong stations, in the Burrangong district”

GOOD. WORK WITH THE GUN.-Thirty shooters took part in the pigeon match at Tumut, on July 2, for the Percival Bracelot. Nine shot their seven birds. The shoot-off was won by H. Gibb, of Talbingo, who killed fourteen without a miss. Burns of Gundagai, was second with thirteen.

This article places Henry in Talbingo in 1886 the year his first child was born.

By 1891 Henry and his family were back in the Forbes district. (where Roy was born). It is possible that he owned a property at Black Yamma near Forbes because on the 17th November 1892 Henry James Gibb was declared bankrupt at that address.

Things must have been going bad for Henry as on the 30th March 1893 he was tried for Cattle Stealing. 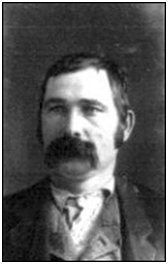 At the Forbes Quarter Sessions last night, before his Honour Judge Docker, Henry James Gibb and William Andrew Berghoffer were each found guilty of stealing, in February last, 41 head of bullocks from Carrowobbity Station, near Forbes, the property of Mr. Henry Blanchard Coward, owner of the station. This morning they were each sentenced to four years, penal servitude”.

The portrait of Henry James Gibb shown right was taken on the 17th April 1893. This photo was in his Prison records.

Bruce Mellor tells that Henry travelled to Rhodesia to join the British South Africa Police in 1896 but it is not known how or why he had his jail term reduced.

“The War in Mashonaland”

“War broke out in June 1896 at Mazowe with an attack on Alice Mine. This was followed by the medium Nehanda Nyakasikana capturing and executing Mazowe Native Commissioner Pollard.

Other religious figures who led the rebellion include Kaguvi Gumboreshumba, who was active in the Goromonzi area and Mukwati, a priest of the Mwari shrine who was active throughout Mashonaland.

In addition to the mediums, traditional leaders played a major role in the rebellion, notably Chief Mashayamombe, who led resistance in his chieftancy in Mhondoro, south of Harare. He was amongst the first chiefs to rebel and the last to be defeated. He was supplied by many of the surrounding districts, such as Chikomba (then Charter). Other chiefs who played an important role included Gwabayana, Makoni, Mapondera, Mangwende and Seke.

With the war in Matabeleland ending, the Gen. Carrington was able to concentrate his forces on Mashonaland and the rebels retreated into granite kopjes. With no central command to oppose him, Carrington was able to bring maxim guns against each stronghold in turn, until resistance ended. Nehanda Nyakasikana and Kaguvi Gumboreshumba were captured and executed in 1898, but Mukwati was never captured and died in Mutoko.

The rebellion failed completely and did not result in any major changes in BSAC policy, for example the hut tax was implemented. The territories of Matabeleland and Mashonaland became Rhodesia and both the Ndebele and Shona became subjects of the Rhodes administration. However, the legacy of leaders such as Kaguvi, Mapondera and Nehanda was to inspire future generations Henrys medal is shown left.

In 1901Henry James Gibb enlisted to fight in the Boer War. The book called “Official Records of the Australian Military Contingents to the War in South Africa” show us two enlistments for Henry.

The Third New South Wales Imperial Bushmen was a regiment formed at Klerksdorp, Transvaal, on 4th May, 1901, from drafts consisting of 230 officers,

N.C.O.'s and men intended for the New South Wales Imperial Bushmen and the Citizens' Bushmen; but owing to these two regiments being under orders for home, the men were formed into a separate regiment under the command of Major Hon. Rupert Carington his regiment was attached to Lieut.-Colonel E. C. Williams D.S.O's. Column, and took part in all the engagements of that Column (with the exception of Karanafontein), and during the year marched over 4,000 miles. During the months of May, June, July, August, September, and part of October, they operated in the Western Transvaal, where numerous captures of prisoners, wagons, and stock were made. On 24th October, the Column left Klerksdorp and went to Eastern Transvaal, where they took part in General Bruce Hamilton's operations, resulting in heavy loss to the enemy. 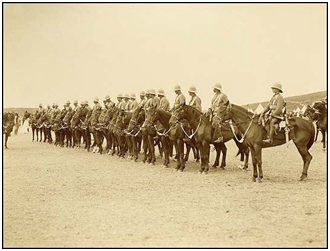 A contingent of Bushmen

In January, 1902, another squadron was formed from Australians, recruited in Cape Town, and in February another was formed, bringing the strength of the regiment up to over 500 men. On 4th May, 1902, some of the time-expired men of the regiment proceeded home in the transport Ansonia; but many of the men and nearly all the officers volunteered for further service.

A draft of 200 Riverina bushmen, raised by Mr. J. S. Horsfall, of Widgewa, New South Wales, and the volunteers for further service, joined tho regiment at Klerksdorp, Transvaal, and were attached to Colonel Williams' Column, who again was operating in the Western Transvaal, and served until peace was declared in June, 1902. The regiment sailed from Durban, Natal, under the command of Lieut.-Colonel Hon. Rupert Carington, in the transport Drayton Grange, 12th July, for Sydney, calling en route at Albany and Melbourne, and arriving 11th August”.

“This regiment was established at Sydney upon pretty much, the same lines as the 1st Mounted Rifles; except that, as no service squadrons were away, the whole corps was embodied in New South Wales. Preference was given to trained men who were good shots and good riders, subject to tests as ordered. The age limit was 20 to 40 years; standard height, 5 feet 6 inches and upwards; minimum chest measurement, 34 inches.

The 2nd New South Wales Mounted Rifles were engaged in operations against Generals De La Rey, Kemp, Potgeiticrs, and Vermaas : (a) Served in the Western Transvaal, under the command of Major-General Fetherstonhaugh, from 23rd April to the 1st October, the principal operations being the capture of Potgeitiers' convoy on the Vaal, 24th May, 1901 ; capture by the regiment of General De La Rey's convoy of 106 waggons, a large quantity of cattle, ammunition, &c.

(Served in the Eastern Transvaal, under Major-General Featherstonehaugh; engaged in many night marches, resulting in over 1,000 prisoners being captured. The regiment served under Colonel E. T. C. Williams, of the “Buffs," throughout, with the exception of six weeks, when the column was commanded by Lieut –Colonel Lassetter”

Henry was certainly not afraid to fight as for the third time in his life he joined the army. However this time he had to put his age down to meet the criteria for enlistment. He stated that he was only 43 years and 11 months, however he was really in his 60’s. The following shows his enlistment details.

Sadly time ran out for Henry as he was Killed in Action on the 7th June 1918, due to shellfire at Aubigny near Villers-Bretonneux, France.

From the Australian Red Cross and Missing files.

I saw him immediately after he had been killed outright, at the left of Villiers Bretonneux, by a piece of shell while he was carrying for a ration party. Gibb was about 60 years old. I saw the burial party headed by the Battn. Padre (Major Rolland) take his body to the Lime Stone Quarry Cemetery, at the south of Villiers Bretonneux.

On June 7 we were on the left of Villiers Bretonneux returning from the front line to reserve line when a shell burst close to Gibb’s feet. His body was gathered and buried at the back of Villiers Bretonneux. A cross marks the grave. I have seen this. I also saw Gibb killed being only 4 yards away from him at the time. The shell killed two and wounded four. A mate of mine took H J Gibbs son who is in the Artillery to see the grave.Gibb came from NSW in same boat as myself on the 17th November 1916. He was an old army man and had fought in the Boer War. He was nearly 60 years old 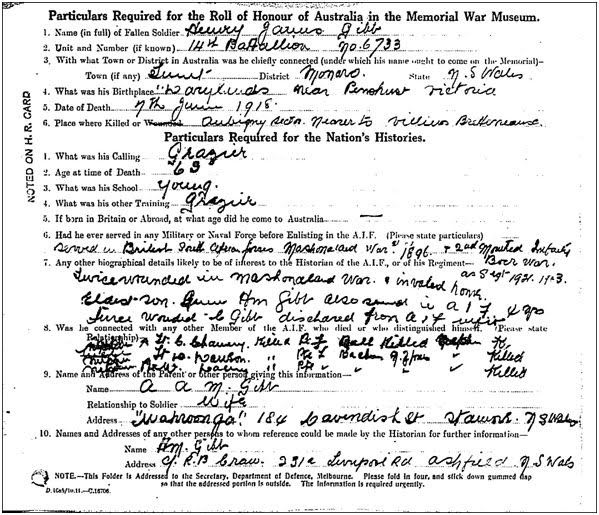 Particulars required for the Roll of Honour of Australia 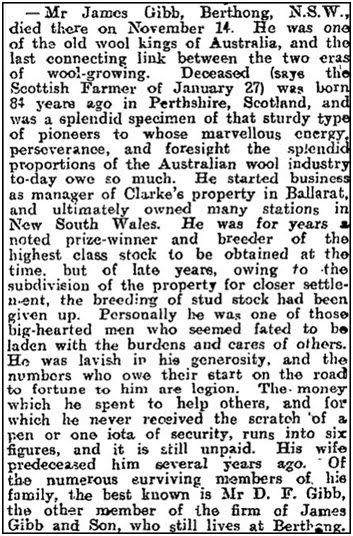 I saw him killed by a shell (which also killed Gullickson R) instantly- We brought the two down and buried them on the left of Villiers Bretonneux both marked with cross on graves. Enlisted in NSW. Station owner about 50 years of age, medium well built, grey hair, called him Dad. Has a son I believe in the 3rd Division Artillery

A sad end for a brave man who fought for his country in three different conflicts.

It is said that Henry was the oldest Australian to be killed in Battle.

Henrys father died on November 14th 1905. This article from the Otago Witness describes a very rich and kindly man.

Official Records of the Australian Military Contingents to the War in South Africa.