This article represents further research to previous work on rabbits undertaken by Mt. Rouse Historical Society researcher Phillip Doherty. The primary source for information has come from the Mt. Rouse Shire Minutes and covers a twenty year period from 1881 - 1901. Author’s observations are in italics.

On 14th of January 1870 the Argus Newspaper reported on the war on rabbits as follows: William Robinson of Colac has destroyed hundreds of thousands and also filled up the wombat holes the rabbits have taken possession of. He also had his stone walls so constructed that a rabbit cannot find a hole to gain entrance. He also keeps a large pack of hounds. Other stations are not so careful. Men received 10 shillings per 100 rabbits with rations and ammunition provided. The number killed on one station in the Western District was 102,816 and the expense was £591 for three months.

Eric Rolls, author of “They all Ran Wild” found enough evidence to show that rabbits were initially moved about the country by humans, instead of moving of their own accord. By the early 1870’s five main breeding centres had established in Australia including: Balranald and Wentworth in New South Wales, the Mallee and the old ground (original plague site) at Colac in Victoria, and Kapunda in South Australia.

The first law submitted to get rid of rabbits was introduced in 1869, but it didn’t get the numbers in parliament to be passed. By October 1878 the government empowered local bodies to charge an inspection fee at 2 pence per acre to see whether land was infested. 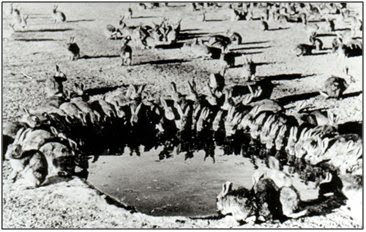 By 1881 rabbits had spread to the Mt Rouse Shire and the first mention of rabbits was made in the Council minutes.

Obviously the Shire didn’t think they had a rabbit problem and the rate collector could keep an eye on things as he went around the Shire.

1881 – June 8th Rabbit Inspector was authorized to obtain a small amount of poison and give assistance for distributing same.

1881 – October 12th – Inspector requested to have printed notice of the Rabbit Suppression Act of October 1880 No. 683 and serve every ratepayer (a copy). Also a rabbit Exterminator, Hayes Patent be purchased for £10.

1882- March 8th Inspector authorized to obtain two or three bags of grain and have some mixed with Phosphorous. Residents to have at cost price.

As reported in the Portland Guardian September 1881. When Phosphorised oats were used to poison rabbits the grain poisoned just about everything but the rabbits, including wallabies and hawks. It was soon discovered that many rabbits wouldn’t eat the oats if any green feed was about or if there was an availability of dry feed.

This is the first mention of sighted rabbits in the Penshurst area.

It’s likely that the rabbits invaded Mt Rouse because of the numerous wombat holes, which made good burrows and breeding grounds for the rabbits.

1883- May 9th Letter of Complaint. Re: the rabbit nuisance at Beggs. Also H. Beggs of “Bushy Creek” complaining that allotments 57 & 58, forming portion of Narrapunelap Estate and situated in the centre of Mr. Beggs land in the Parish of Buckeran Yarrack are infested with rabbits.

It appears that the landowners were beginning to blame each other for the plague.

1884- April 9th Inspector to urge landholders to continue their exertions in the matter of rabbit extermination, otherwise there will be a speedy increase of the pest.

1884- May 14th Notice to destroy rabbits to be served on Nurendoo Estate, also steps to be taken to dig out or otherwise the rabbits on Lake Linlithgow Reserve.

1884- July 16th Letter from the Secretary of Lands expressing satisfaction with the way the Rabbit Act was being enforced in the Shire. Also Councillor Mackiehan to attend rabbit conference and submit amendments to the Act. Re: Clean up fallen timber, destruction of live fences e.g. Gorse and Furze fences. Another letter from T. O’Brien “Springfield” Re: Rabbits on Hern Huth Estate. Notice to Mr. Pagells to destroy rabbits on his land at Narapundah.

The Shire Secretary made a note in the margin of the minute book. Headed – “Rabbits destroyed at Hopkins Hill”. It was incidentally mentioned whilst discussing the matters referred to in the rabbit Inspectors report, that the total number of rabbits destroyed since the 1st of the January of the present year on Mr. Aitkens “Hopkins Hill” Estate exceeded 22,000.

That equates to about 90 rabbits a day.

1884- November 18th Bonus to rabbit Inspector Mr. Heighington £20 for services rendered for the past 12 months, and that he be appointed Inspector for the whole Shire at £20 for the ensuring year.

Remember in 1881 the Rabbit Inspector was paid a token 1 shilling, so it looks like the Council finally realised that they had a big problem with the rabbit plague.

Also the Council decided that no dog license fee was payable for rabbiters and their dogs. In a proclaimed vermin district.

1885- May 15th Letter from Mortlake Shire Re: Rabbits on the West bank of the Hopkins River at Chatsworth.

Going through the minutes it seems like the area around Hopkins River at Chatsworth was a hot spot for rabbits. The rabbits may have arrived in the district following the Hopkins River upstream.

1885-July 15th Letter from The Crown Lands and Survey Re: the Mt. Rouse Shire was a district in which the destruction of native and tiger cats, domestic cats ran wild and the iguana is prohibited, those having been declared the natural enemy of the rabbit.

Except for the domestic cats running wild, the rest would have been exterminated long ago.

1885- September 19th Peter McIntyre was appointed rabbit Inspector for the whole Shire at £150 salary as follows. Chatsworth riding £90, Dunkeld and Penshurst £30 each.

These costs clearly show that the main problem was in the Chatsworth riding.

1886- February 10th Letter from Walter Gow, manager ‘Brie Brie” Estate Re: the fact that the rabbits were on the increase, notwithstanding the fact that he had men engaged exterminating continuously during the last 12 months. He proposed to erect a sunken netting at £400, before this he needed the Council to close or sell the mile of 1 chain road through the most badly affected part to the Estate, known as Scrubby Hill (the Council agreed).

Walter Gow was clearly a man ahead of his time as was later proved when netting areas of land was the only way to control the rabbits.

1886-April 4th A report of rabbit burrows on Chatsworth common.

1886- July 14th Council decided to pay a £1 bonus for each fox destroyed within the Shire. The skin had to be produced. On August 16th Mackie Pascal herdsman of the Chatsworth common was paid £1 for the first fox destroyed in the Mt Rouse Shire.

The rabbits moving up from Colac and the foxes moving across from Ballarat had finally met.

1886- August 16th Letter from Charles Gray “Nareeb-Nareeb” stating he believe it had been lately reported that his run was swarming with rabbits. This is a great falsehood.

1886-Decemebr 8th Mr. McIntyre asking to be relieved as Inspector for Penshurst and Dunkeld ridings, too much work for one man. Council said he could keep Chatsworth riding for £80.

1887- January 12th Inspector reported rabbits were plentiful in certain parts of the Shire.

1887- July 20th Inspector reported rabbits undermining the embankment of the East side of Burchetts Creek, Caramut and Chatsworth Road.

It looks like 1887 was a quiet year for the rabbits; maybe it was a wet year that flooded out the breeding burrows.

1888- February 8th Special reports. Rabbit Inspector sought permission to spend the whole of the coming month in the Chatsworth riding, also to put men on when private owners failed to comply with the Rabbit Act (granted).

1888 – March 14th Letter from Ararat Shire and several owners complaining about the influx of rabbits from the Mt. Rouse Shire. Also a letter from William Bell “Cherrymount” Estate complaining that the Shire did not enforce the Rabbit Act. Little was being done by his neighbours; trouble was coming from Mr. J. Walters Estate.

Clearly the rabbits were breeding up again over towards Wickliffe. 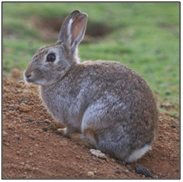 1888- May 9th Inspector reported Embankment on the Mt Napier Road near Messrs Page & Reidys was badly honeycombed with burrows.

Rabbits found that embankments that were built up with soil, leading to culverts and bridges on the Shire roads, very much to their liking for burrowing.

1888- July 18th Inspector authorized to dig out burrows in the Penshurst Park (Mt Rouse). Provided the holes were afterwards carefully filled in and rammed.

1889- March 13th Letter from John Neil McArthur “Lawrenny” Caramut directing attention to the very large increase in the rabbit pest in that district and recommended digging out of burrows as the surest way of exterminating the vermin.  Also James Todd Re: rabbits doing damage to the

embankment of the bridge on East Creek, Glenthompson and Caramut Road by rabbit burrows. Also Gerald Buckley from Narrapumelap complaining of the quantity of rabbits that infest his property from adjoining lands and from bridges and culverts on the roads intersecting his estate.

Digging out the warrens (burrows) alone would not by itself control the rabbits as under plague conditions most rabbits lived above ground.

1889- April 10th Inspector reported he inspected the land in the Caramut district and had found burrows on Mr. Milligan’s land (Purdeet) had been thoroughly dug out. Little evidence in other quarters. The labour party was working on the embankments mentioned by Buckley.

1889- September 11th Drawn attention to increase of rabbits in the Glenthompson district.

1890- May 4th James Duffy, inspector reported the Vermin Destruction Act required the Council to destroy rabbits on the Mt Rouse Reserve. The day labour (work gang) to dig out.

It appears that the council was trying to get out of the expense of looking after Mt. Rouse.

1890- December 10th Re: rabbits in Chatsworth cemetery and common, also letters and discussion on the use of rabbit proof wire netting.

1891- January 14th Councillor Howell said he had been served notice to destroy rabbits in a rough stone wall near Devon Park, left by road contractors. Also council to ask the Government to net the southern portions of the Grampians as it was a perfect breeding ground for the vermin.

1891- July 15th Letter from Minhamite Shire Re: support that the land tax be paid to Councils for two years to destroy the rabbits, plus a letter from Warrnambool Council Re: bonus to be paid for rabbit skins.

A rabbit pest conference was held at Penshurst on the 28th of July 1891. Belfast, Dundas, Minhamite and Warrnambool Shires attended.