On the 30th April 1851 Patrick Kennedy murdered his wife.  The newspapers of the time carried detailed stories of the court proceedings.

This report covered his appearance before the General Criminal Sittings in Geelong. 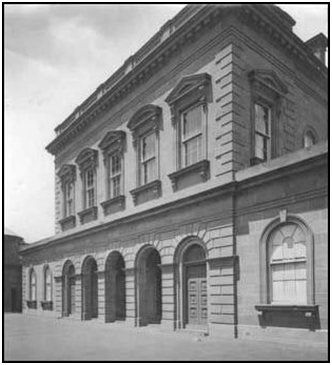 Geelong Criminal Sittings. (Before His Honour the Resident Judge.) Tuesday, June 25. Patrick Kennedy was placed in the dock.

Mr Elliott—I appear, your Honour, to apply that you defer this trial; the prisoner is not prepared with the requisite evidence; he was committed to Melbourne, and thinking that he should be tried there, he had not prepared his defence.

The Crown Prosecutor—The offence was committed in April; the prisoner has had from the 3rd May to the present time, to prepare; if the trial be deferred the Crown will be put to considerable expense and trouble, and two witnesses, if the trial does not come on now will not be forthcoming when wanted; I am informed that they have determined to leave the country.

His Honour—I must have an affidavit from the prisoner.

Kennedy—I have no Counsel, your Honour, or defence prepared, as I thought I should have been tried in Melbourne.

His Honour—I cannot listen to you, except you put in your statement on affidavit, stating what witnesses you want, so that I may have reasonable grounds for postponement of the trial.

The Crown Prosecutor—The only witness he can have is a child four years old.

His Honour—You may be anticipating what the prisoner has to say you will be good enough, Mr. Elliott, to prepare an affidavit.

Mr Elliott—Perhaps your Honour would have the goodness to assign a Counsel to the prisoner.

His Honour—I am reluctant to assign Counsel, but I will ask either of the Counsel present.

Mr Stawell—Declined, because in taking such a case unprepared he might do more harm than good.

Mr. Elliott.—Then we must take the case with all its infirmities. An affidavit of the prisoner was subsequently handed in by Mr. Elliott to his Honour. The substance of the affidavit was, that the Prisoner was committed to Melbourne on the first of May, charged with the murder of his wife; that he did not know until Sunday morning last that he was to be tried, and he believed that he was to have been tried in Melbourne; that his child Winnifred Kennedy was eight years of age, reared in the Catholic faith, and is conscious of the nature of an oath; that she was present with him, his wife, and Williams one of the witnesses a short time previous to the time when the alleged offence was committed, and that she would be able to prove circumstances, which led to a great excitement of mind, from the results of which he was unconscious of anything that afterwards took place, and that the child was 150 miles away, and could not be produced until next session.

His Honour, after perusing the affidavit, observed that he should be sorry to try the prisoner without the evidence of the witness. The trial will be postponed until next session. It was ultimately arranged that the prisoner should be tried in Melbourne in August next, due notice of the trial to be given.

Mr. Croke then intimated that the crown proceedings were at an end.

The murder trial took place in August 1851 and the Geelong Advertiser reported the event.

Before His Honour, Mr. Justice a'Beckett.

Patrick Kennedy stood indicted for the wilful murder of his wife, Mary Kennedy, on the 30th April, 1851, at Mount Rouse. The indictment consisted of three counts, to which the prisoner pleaded Not Guilty.

The Attorney-General stated that the prisoner was indicted for the wilful murder of his wife on the 30th April. The prisoner was a shepherd in the employ of Mr. Cameron. On the day laid in the indictment he had some spirits to drink. Some angry words ensued between him and his wife, when a man of the name of Williams, another shepherd, interposed, and the prisoner desisted. Williams then left the hut, but in a short time returned, owing to the cries of the female for assistance. He then observed the prisoner dragging his wife by the hair of her head, and from the treatment she received at the prisoner's hands she shortly afterwards expired. 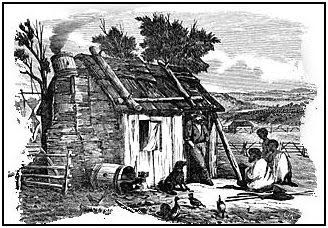 The Attorney General said he should make no comments on the case but simply call the witnesses. John Williams being sworn, deposed, that he was in the employment of Mr. Cameron, of Mount Sturgeon. Knew the prisoner and his wife; the prisoner was also in the employment of Mr. Cameron, also a man of the name of Carte. We were all three in charge of one flock of sheep for lambing, the flock being divided into three parts. On the 30th April last the prisoner sat at the same table with witness to dinner; the prisoner's eldest child was with the sheep, as Kennedy did not take charge of them after dinner. Witness asked the prisoner why he did not take charge of the sheep himself as usual. He replied that there was a good shepherd with his portion of the sheep. He alluded to his daughter about nine years of age. He had four children, all very young, and the youngest only an infant in arms.

The wife of the prisoner was in the hut during this time, but did not partake of the meat with them. She had the youngest infant in her arms. Whilst getting their dinner the prisoner said he was offered £60 and a mare for the

"old woman"—meaning his wife. Witness asked him if he was married? He replied that he was. Witness then asked the prisoner's wife if that was true? She replied "she believed so." Witness then turned his conversation to the prisoner, and observed "'well you have a great respect for your wife as you would not sell her for this world's goods." Prisoner then said to witness—"I'll have to bury you old man." Witness retorted—"I don't think so." Kennedy said—"I will, and I'll have your horse, and I'll kill you." Witness said "I'm not much frightened of that."

Mrs. Kennedy then said to the prisoner—"don't be using such nasty talk Patrick." Witness then left the hut, and went towards the flock for the purpose of separating Kennedy's sheep from his own. Carter had been in the hut, but had left before dinner. Witness returned to the hut and found Mrs. Kennedy crying; she said to witness—"he's angry, very angry, and wishes to vent his spite upon me." Mrs. Kennedy then addressed her husband, and said "don't be angry my dear Patrick." Kennedy made no reply; when witness said—"Patrick, you would never so far un man yourself as to strike a woman, especially one in Mrs. Kennedy's state, being only lately confined, and having a little baby at her side." Prisoner replied he would strike witness if he interfered with his business. Witness answered, "I would rather you strike me than the woman." He answered to this "that he would not strike her, but——." He then made a horrid grin, and struck at her, saying "you brute." Witness tried to quiet him, but he turned him out of the hut, saying "I'll serve you the same."

When witness said to the prisoner "don't be beating your wife, but come out to your sheep," he made no reply. Witness then said, "come to your sheep, or they will be mixed with mine." By the Jury—Never knew the prisoner to strike his wife before this time. When Kennedy made use of the word "brute" he was addressing his wife, and not witness; did not strike the prisoner when he threatened to beat his wife; considered he had no right to interfere any farther; prisoner caught hold of witness and threw him on his back; is not so strong as the prisoner by a great deal; the prisoner was aware of this; Mr. Cameron, his master's brother, returned with witness to the hut, when we found the woman dead; swears positively that he did not see Kennedy drink any spirits that day; there was some spirits in the hut which were left from the previous night; the deceased was about thirty years of age. Benjamin Carter sworn, stated he was employed as a shepherd by Mr. Cameron; remembered the 30th April. Went to the hut at the usual time for dinner; observed Mrs. Kennedy send some bread, meat, and tea to her husband by her eldest daughter.

Whilst witness was eating his dinner Kennedy came in and stood with his back towards the fire; just as he finished his dinner Williams came in and when witness went out he left the prisoner at the bar, his wife, Williams, and the children, in peace and quietness. Witness remained with the sheep, until two o'clock, when Williams, called him away; was about half a mile from the hut. From what Williams told him, returned in his company to the hut, and saw the prisoner outside the hut dragging his wife by the hair of her head; she appeared to be half naked. Her body presented bruises and wounds all over, her face was covered with blood. After the prisoner stopped dragging her by the hair, he stooped down and brutally struck her on both sides of the head, exclaiming "speak you brute." Witness went towards the prisoner to prevent further violence, when the prisoner left the deceased, and taking up a billet of wood from the wood heap, threatened to serve Williams the same way. Witness stood his ground, and began to reason with the prisoner, when he gradually became more calm. Witness then went up to the female and raised her up in his arms; her thighs and breasts were naked; her hair was hanging clotted with blood, and she appeared to be a mass of bruises. Witness took her into the hut in his arms, when the prisoner made a spring at her just as witness was laying the deceased on the bed, and violently threw himself upon her, thrusting witness away. He suddenly jumped up again and stooping down by the fireplace, he was in the act of taking a shear-blade to arm himself with, when witness left the spot and returned to his sheep. When witness raised the deceased from the ground she appeared to be breathing, but very slightly. 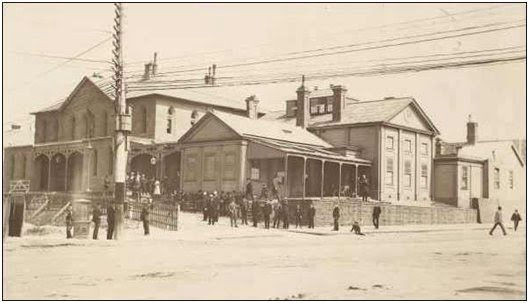 About half an hour after this the prisoner came up to witness whilst tending his sheep; he had his arms behind his back, and told witness to come on; witness replied he was near enough, and asked him what he wanted; the prisoner took his arms from behind his back and said he would not harm him; went back to the hut, the prisoner walking on a few yards before; when we arrived there the prisoner said "the old woman is dead, I've settled her, I don't know what in the wide world induced me to do it; I cannot make it out, it must have been the devil himself that tempted me to do it;" witness asked him what would become of his poor children. The prisoner said "it was only for them he cared, he did not value his own life; he did not care if a bullock chain was around his neck at that instant;" he said he should go to the home station and report it and also get a doctor; the body was then washed and again placed in the bed; witness was drinking with the prisoner the night before; witness also took a glass of spirits at dinner time and the prisoner also took one; this was when Williams came to dinner; the prisoner was not drunk; has known him about fifteen months.