It was reported in the Western Agriculturalist that: Hamilton was being overrun with rabbits. It seems that nearly every vacant block of land or open spaces had rabbits hopping around on them. In April, 23 rabbits were killed in the Hamilton Botanic gardens and in a cricket match between Caramut and Hamilton a rabbit hunt added variety to proceedings, with only one dog on hand the rabbit won the day. The dogs won the next round when 2 sheepdog chased and caught a rabbit down Gray Street.

In May local farmers formed a rabbit hunting club at Mt Eccles with the objective to clear an area of a mile around Mt Eccles. This would have been an impossible task unless a netting boundary fence was erected.

In June a rabbit drive was held on the Mt Napier Station which had just erected miles of netting fences. Fifteen drivers (beaters) took part – 2500 rabbits were killed but 500 got away when a spooked mob of sheep got in amongst the swarm and scattered them.

There is no reason think that the situation would have been any different in Penshurst and surrounding district. 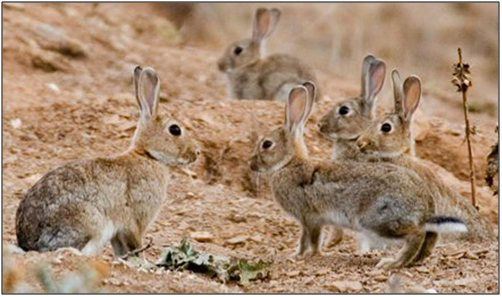 Keith Cameron, of Greenwood, spent most of 1907/08 rabbitting on The Gums and North Gums stations. He started working for JS Ross (North Gums) as a boundary rider in May 1909 and his diary records all the usual station jobs as well as rabbitting with a pack of dogs and digging out warrens.

1910 diary entries relating to rabbits include:

January 26: Dug out the rabbit warrens in Dickeson’s garden, got 23.

April 29: Dug a warren out on the side of the hill opposite Caramut  bridge, digging there all day ‘till 3.30 pm.  I only got 10 rabbits in it. It was 5 feet deep in lots of places.

July 6: Rabbits very scarce in 8 & 9 (paddocks) only caught 4 with the dog pack. Old Heywood has been there the last 6 weeks and killed the lot.

December 29: The North Gums run has but few rabbits on it. And the dogs being very plentiful are starving , poor brutes. JSR (J.S. Ross) has tried in vain to give some of them away, but no such thing has happened. Unlucky for the poor brutes. So to put a few of them out of their misery I was asked by JS Ross to shoot 4 of them. I found it a hard thing to do but better that way than starving so in the evening I shot three rabbiters, poor old Snip, Driver and Rover. There is still one to shoot – a sly two year old that no-one could catch.

Keith’s diary clearly shows that after years of hard work, the Gums (North and South) had rabbits under control. The total caught by Keith for the year (May 10, 1909 - December 31, 1909) was only 1234 rabbits, with hardly any caught in the Spring or early Summer. This compares with two weeks in 1908 when 661 rabbits were caught in one paddock (No. 5 Paddock).

Another station attempting to control the rabbit plague in 1910 was Ripponhurst (originally Harton Hills) situated between Penshurst and Macarthur. In Pastoral Homes of Australia, written in 1910, controlling rabbits on Ripponhurst was described as follows:

The rabbits presented the most formidable task to be faced in bringing the estate into its present workable condition. They had riddled the paddocks with great warrens, where whole colonies of them lived in the soft porous soil. Hollow logs and trees full of them and no lasting impression could be made by fumigating and trapping. The only possible means of eliminating the pest was by working the property in sections and destroying all the cover acre by acre, and permitting none of the rodents to escape.

That was the task Mr Sargood undertook, and the expense was very heavy, as many as 100 men on occasions being employed at one time. To thoroughly carry out the scheme and to ensure the property in future fences were netted, and the whole place “dug out”. About 70 miles of netting was used in this way. The result is that one may now ride almost all day through the estate without seeing a single rabbit.