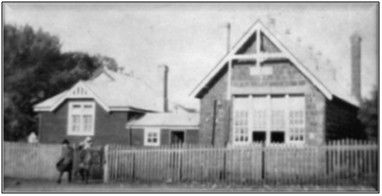 A 30 page history of the school is available from the Historical Society for $15 plus postage.

A National School commenced at Penshurst on December 20th 1858 with 34 children attending. Patrick D. Baxter, a qualified ship's master, was the head teacher. The building was erected by the parents on the south side of Bell St, Penshurst, in the parish of Boram Boram and Yalimba, County of Villiers. A later bluestone school of two rooms was built on the corner of French and Watton Streets. In 1962 this old building was condemned as a school and was made available to Penshurst Youth Club for conversion to club rooms. A new building was erected on land secured on Kolor Estate, fronting Ritchie and Martin Streets and opened by the Minister of Education, Hon. J.S. Bloomfield, on September 13th 1963 after having been occupied earlier that year. A large hall was added in 2009, funded under a Federal Government stimulus package.

This school opened on September 22nd 1873 as S.S.1223 Purdeet and Muston's Creek, the two being worked half-time in leased buildings. The head teacher to November 26th 1874 was Michael Dwyer. The combined average attendance that year was 16 pupils. By June 1881 the department had supplied Purdeet with a schoolhouse of brick and stone accommodating 25 pupils and measuring 22ft x 12ft. Muston's Creek, with which Purdeet still worked part-time continued in its leased building. The school closed on December 31st 1912 and re­opened on July 1st 1914. It finally closed on December 31st 1925. 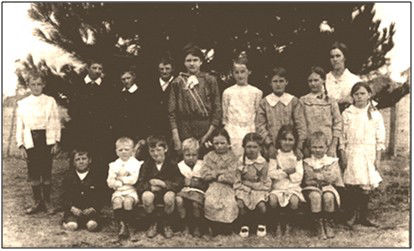 The first application for establishment of a school at Kolor South was received by the department of education on April 27th 1910. In June of that year District Inspector Dooley recommended that a school be established. The school, situated approximately six miles south of Penshurst, opened on October 26th 1911. Miss Gladys V. Linton was head teacher from the opening of the school until June 30th 1914. The school closed on May 15th 1917 but re-opened on November 31st 1922 with an enrolment of 13 pupils. The school finally closed in 1928. 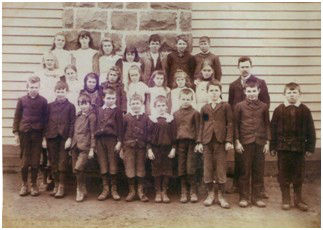 Boram Boram school was situated opposite the present site of Penshurst cemetery. The education department supplied a wooden school house to accommodate 40 pupils. S.S.1237 opened on July 5th 1875 under head teacher Frederick C. Green. The average attendance during the year was 9 (6 boys, 3 girls), so overcrowding was no problem. Green remained until July 17th 1879. From March 1879 until April 1882 the school worked part-time with Croxton East. It also worked part-time from June 1st 1884 till October 18, 1890 with Lake Linlithgow. Low enrolments forced closure of the school on February 28th 1899 but it re-opened on June 9th 1902 and continued to serve its community until the final closure on December 31st 1916. The building was shifted to Anton Linke’s property at Minhamite and later purchased by the Penshurst Methodist Church for use as the Methodist Sunday School hall at Penshurst. 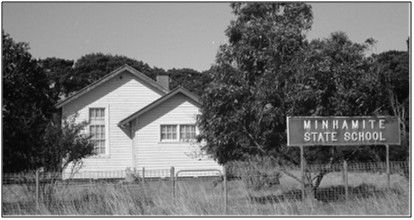 Located on the Hamilton to Warrnambool Road, Minhamite School opened on April 28th 1919 with Mary Shelton as head teacher. Its original number was S.S.3136. The first 10 children came from the Green Hills Estate which had 18 soldier settlement allotments. Children moved into a new school about 2 kms from the railway station during the December of 1930. Contractors completed a residence in 1935. The school had its own artesian bore and mill. After its closure in 1981 the building was sold and is now a private residence.

The story of the Greenhills Soldier Settlement is elsewhere on this website. 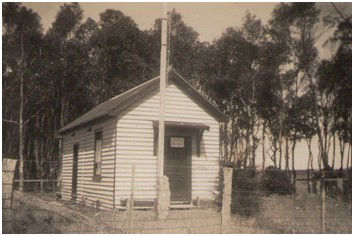 A school building from 1223 Purdeet was purchased by the people of Burn Brae and shifted to the site of the Burn Brae school, about 8 kms north of Penshurst on the Caramut Rd, adjacent to “Burn Brae” homestead early in 1928. With Miss Muriel Clifford as head teacher the school opened on May 26th 1928. A committee was formed at a meeting on June 14th 1928. The members elected H.D. Cameron, president and W.C. Cameron, correspondent. J.D. Kruger served continuously on the committee until 1953 and K. Cameron from 1930 until his death in 1953. Due to small enrolments the school was often threatened with closure before it actually closed in 1959. The building was later sold to C. Kruger who shifted it to his property. 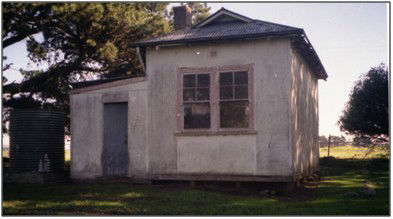 In 1937 G Fry, on behalf of parents of surrounding stations, asked for a school at Nareeb West. The residents erected a building on one acre of land provided by Beryl C. Beggs, and 4562 Nareeb opened on January 1st 1938, with Michael Healy as the head teacher. There were 14 enrolments at the time of opening. A bush fire in 1940 destroyed several homes thus causing a decrease in the number of pupils. The school closed on April 14th 1942. It re-opened on March 20th 1945, and finally closed on May 9th 1952.

A.B. Ritchie, owner of Blackwood station, and CP. Goulding, manager wrote to the education department in 1937, expressing a desire to have a school established on the station for the benefit of the employees’ children. In spite of a low attendance 4576 was approved and opened on February 15th 1939, with Robert F. Featherston, as head teacher until 1940. Classes were held in a room at the station in the Parish of Kay, Shire of Mount Rouse. The school was unstaffed in December 1949 and closed on November 26th 1951. 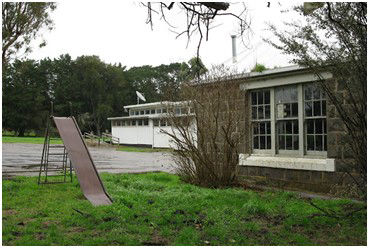 The first Caramut School opened in the late 1850s in a room in Mrs. Rea’s house. Later it was transferred to a shed of Dr Ewing’s. Parents had to pay for their children to attend the school. In about 1861 a Common School was built of stone next to the present post office. It contained three rooms and the schoolroom. The first teacher in this school was G Launder, a fine scholar and athlete. He taught in this school till 1869, when the new school was built on a new site. He carried on till 1872 in the new building which became a state school with enrolments of around 50. J Whyte, who became head teacher in 1883, conducted a night school for district folk unable to read and write. The school served for all local functions, both religious and social, until the hall and church were built. After the Second World War several large tracts of land were acquired for the settling of ex-servicemen on farms and from 1948-1958 school enrolments trebled. In 1970 there were 105 children on the roll. The old bluestone building became inadequate and two extra classrooms, together with modern facilities were added for children and staff. A very large percentage of pupils travelled to and from school in buses provided by the education department to serve outlying areas. The decade 1958-1968 saw school attendance rise to a peak, taper and fall. During 1965-68, when the school was raised in status to Class 2, many improvements occurred, the grounds were extended and a head teacher’s residence purchased. The school was elevated to Class 3, with its many improvements and modern equipment, but eventually closed at the end of the 2004 school year.

A school was first established at Chatsworth in 1874, in the old Presbyterian Church, which had been condemned for church purposes but was considered suitable for a school. Most of the children came from the families of workers employed on “Chatsworth House” station. The later school was built about 1902, when a William T. Cuthill was the head teacher. A second weatherboard classroom was added in 1958. Enrolment usually exceeded 30 with children coming from “Chatsworth House”, “Coolana”, “Nareeb”, other district properties and from the township.

Gazette State School opened on August 30th 1925. The first head teacher was Elsie Murray. On May 30th 1947, 13 pupils were being taught by Miss F. P. Dane. Other teachers were Messrs V.W. Mitchell, H.A. Williams, A.J. McDonnell and H.J. O'Connell, who was the school’s last teacher when it closed on February 23rd 1955. The enrolment at the time of closure was 7. Gazette is a grazing district in the Shire of Dundas.

The school opened in May 1958 after application had been lodged with the education department by parents whose children then attended Hawkesdale school, about 20 kms miles away. Initially the school had very poor facilities, but a active committee immediately set to work to overcome these deficiencies. Head teacher, H.F. Doonan, enrolled 29 children in May. In 1959 head teacher M. F. Fitzgerald was appointed and a library was established. In 1961 there were 26 children enrolled. Paths and an asphalt assembly area were laid. In 1962 after several applications and with the help of parents, a boundary fence was finally erected. The grounds were cleared of stones, a garden was fully established, 60 trees were planted and septic toilet facilities were installed. In 1963 head teacher L.M. Wilkinson had an enrolment of 21 pupils. The next year the committee installed football and basketball posts and Minjah won the rural schools section of the Hawkesdale Sports Under the guidance of head teacher Bob Smith . In 1967 enrollments fell, with a further decline to 13 the following year. By 1970 only 7 students remained and by the end of the year the school was unstaffed.

The school was built in an attractive position on a rise beside the lake. In 1942 the teacher from Lake Linlithgow School enlisted in the military forces and, as another teacher could not be found for six months, Pastor Minge took classes when he could spare time from his parish duties. The parents made a request to the department of education to take over the school and in July 1942 S.S. 2588 Lake Linlithgow opened. Head teacher, May Coffey, enrolled 22 pupils. In 1943 O.W.K. Mclntyre, later District Inspector, became Head teacher. Not long afterwards the school building was moved to a site near the Tabor Lutheran Church and conducted as a church school.

Sources: Vision and Realisation A Centenary History of State Education in Victoria

Article by Brian O’Brien in the Penshurst News 1992.