John Joseph Twomey, his wife Margaret and six children arrived aboard the Royal Consort in 1844. It seems another three children were still in Ireland. John Twomey was listed as a labourer on the ship records but this maybe so he could qualify for a free passage - labourers being in much demand. Little is known of the Twomey's first years on the Port Phillip district of NSW (as Victoria was known then).

The first record of the Twomey farming enterprises is in 1852 when John Twomey Jr took over the lease of the Old Stockyard run from William Buckley (later transferred to John Snr). John Twomey Jnr bid for £420 per annum for eight years was accepted for the vacated run known as Kolor which had been surveyed out of the Aboriginal Protectorate. John Snr's daughter Honara arrived aboard the Argyle in 1853. The eldest daughter Katherine stayed in Ireland.

In 1859 Denis Twomey, the 5th son of John and Margaret, died aged 24. Another son Timothy was with his father at the Old Stockyard and Daniel was in partnership with John Jnr at Kolor. Records show that they had both signed a petition for a Police Station in Penshurst in 1860. Edward, the youngest son was also now buying land with his brothers in the Parish of Yatchaw East and Langulac.

The 1862/3 Shire of Minhamite records show that Edward, John and Daniel had bought 4695 acres in the Parish of Langulac expanding Kolor south. The following year John Twomey Jnr. was elected to the Mount Rouse Council.

Then tragedy struck in 1865 as John Jnr went missing from the ship Edina traveling from Warrnambool to Melbourne. John left a widow and four children. The children had all been born at Kolor Mount Rouse. It appears that John's widow Mary and the surviving partner in Kolor, Daniel couldn’t agree on a settlement so they ended up in court: 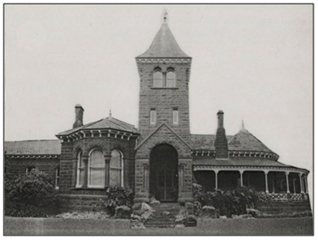 The Kolor Station and Stock

Warrnambool district in the colony of Victoria

To be sold pursuant to the decree of the Supreme Court of the colony of Victoria. Made in the cause of Twomey V Twomey with the appropriation of Frederick Wilkinson esquire, the master in equity of the said court by Mr Stubbs at his sale rooms, No 81 C

Situated at Mount Rouse in the Warrnambool district in the colony of Victoria.

Particulars of the property.

13,010 acres, 2 rood, 31 perches of freehold land. 1105 acres, 1 rood, 5 perches of land held on leases, under the land act 1862 under which 12s 6p per acre have been paid and on payment of an additional 7s 6p per acre the purchaser will be entitled to grants of the fee. About 318 acres of crown Land held under the departing license at £13-6-8p per annum. 2 half acre allotments in township of Penshurst 1 quarter acre allotment in North Hamilton – Improvements on the Station.

Daniel Twomey managed to buy back Kolor at the public auction for around £39,000 (he was entitled to half the proceeds). In 1867 he was elected to the Mount Rouse Council for the riding of Penshurst.

The Twomey men were renowned as sportsmen. The Hamilton Spectator reported on a major kangaroo hunt on Twomeys’ Banemore Station, where five hundred kangaroos were killed by one hundred horsemen. Regular snipe and hare shooting parties were held on all Twomey properties.

Within a year of buying back Kolor Daniel Twomey started to build Kolor homestead. The honor of laying the foundation stone was given to his father John Joseph Twomey.

The original slab house mentioned in the sale notice was believed to have been where the elm trees are at Ray Morton’s house on the Warrnambool Road. This would link with the Kolor bluestone woolshed across the road which was built at the same time as the Kolor homestead.

Cornelius, another son of John Snr, had stayed in Ireland to be trained as a priest at All Hallows College. Cornelius later arrived on the ship Great Britain and eventually became Parish Priest at Tumut NSW. He died in Melbourne in 1882, the same year that Edward took over ownership of Langulac Station (south of Kolor).

Records of the day reveal that Daniel Twomey, although quiet and unassuming man was one of the most popular figures in Western District in the early days. He was a very generous host and took an interest in all sports. He married Ellen Cameron, from Penola station S.A. and they had two sons and two daughters. His wife later died on a trip to Europe and Daniel died not long after in 1891 aged 60.

Edward Twomey looked after Kolor until Daniels eldest son Francis O’Connor Twomey (who was being educated in England) came of age.

By the time Francis took over the property the wool industry was in a state of depression and most of the estates around Penshurst were being leased out for dairying. Dairying was rapidly expanding so most of Kolor was divided into dairy farms and leased.

By 1912, Francis Twomey was listed as having 5000 acres at Kolor with another 4524 acres sold to C.R Tulloh (South Kolor Estate). This may have something to do with the settling of the estate of Francis’s brother Daniel John who died on a trip to China the same year.

Francis Twomey was a long time President of the Racing Club and the Penshurst Gun Club where regular live bird competition shoots were held at Kolor.

In 1915 Francis enlisted in the First Australian Imperial Force 54 Battalion. An original Anzac he was wounded at Gallipoli, later transferred to France, again wounded at Pozieres. It was at Bullecourt where he was wounded yet again but gained a Commission in the field after the battle. Francis O’Connor Twomey was killed at Hargicourt 1st October 1918. He was 41 and unmarried.

With no heirs to take over Kolor and his two sisters living in London, the last of Kolor Station (2714 acres consisting of the homestead and eight share farms) was sold in 1929. Kolor had been in the Twomey family for 77 years.