Typhoid is caused by a bacterium Salmonella Typhi, which comes in more than fifty strains and inhibits only the human digestive tract. Typhoid usually presents as a result of unsanitary conditions usually caught from contaminated water and food. An outbreak of Typhoid Fever in Penshurst, May 1872, was blamed on exhalations from the Ti-tree Swamp (the Spring drain later known as Murdum Creek). A Scarlet Fever outbreak in 1876 was blamed on the town privies (outhouses) and the poor draining around the town. With a temporary fever tent set up on the Sanatorium site at the east end of Bell Street unable to cope, the newly built Temperance Hall in Watton Street was used as a fever ward. The Board of Health closed the local school. 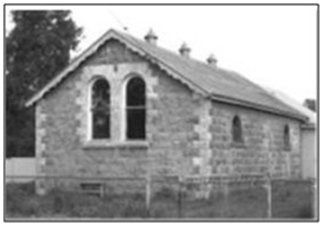 After years of complaints about the smell of night soil being dumped in old quarry holes around town and overflowing privy drains the Council decided in March 1889 to establish a night soil service. Joseph Collins won the Tender to have the honour to become Penshurst’s first night soil collector. The night soil depot was at the northern end of the race course lane – the site is now covered with mature pine trees.

The Council and the local Board of Health didn’t have long to bask in the glory of establishing a double pan service before the coming of the railways and the attendant navvy camp was blamed for a new outbreak of Typhoid Fever. A letter from the Shire of Mt Rouse Medical Officer for Health, Dr. Woodforde, dated 7 January 1890, stated that three cases had appeared. Two were among the navvies employed by Neil McNeil & Co. (railway contractors) and the third a carrier Mr. George Cook who resided on the same lane as the night soil depot. The doctor reported the navvy camp to be clean and tidy but the water was drawn from the creek (Murdum) where the railroad crossed about a third of a mile below the Spring basin, and after it had been polluted by horses, cattle, dogs and geese which belonged to the ratepayers who depended on this part of the creek for water. Dr. Woodforde went on to describe how he arranged with McNeils to bring the navvy’s latrines under the towns night soil pan regulations.

Just when everyone was starting to relax three new cases were reported on 28 March. Dr. Sweetnam reported that he was in attendance on a case of Typhoid, the patient being Thomas Rice of Caramut Road. Dr. Woodforde reported two cases, a man named Collins aged 32, a navvy employed by McNeil & Co who was sent to Hamilton hospital as was Walter Coleman, aged 19 a Penshurst butcher who remained on the premises with full precautions taken.

The next cases were reported in early April. Firstly Julia Kennedy aged 16, then Albert Langley aged 13, followed by Eric Ridout Woodforde aged 8 – the doctor’s son. Next was Archilus Nicholls aged 30 and his daughter Jessie aged 4 and a half of Devon Park Station and finally Joseph Underwood aged 15.

Two weeks later Mr. William McKenna was reported ill; the next day seven new cases were confirmed. Mrs. Voice who was removed to the Hamilton Hospital as was Mr. Garrett, A. Smith and Glover. All three men were navvies for McNeil’s. At first Glover refused to be removed so it required an order from the Medical Officer of Health, supported by a Justice of the Peace, to shift him to Hamilton.

Robert Aitken from the tannery contracted the fever but was allowed to stay at home. Charles Kelson, aged 21, was the second case from Coleman’s Butcher shop. William Tobin, licensee Prince of Wales hotel, aged 47, was one of the oldest to succumb to the fever. A David Munro was reported as having died from Typhoid.

During April Dr. Woodforde, as the Shire Medical Officer for Health, wrote in a report to the local Board of Health stating that the occurrence of Typhoid Fever had become an epidemic.

We have had sporadic cases of the disease amongst us since the end of last year but in each case we got rid of the patient when possible by promptly using the refuge afforded by the Hamilton Hospital... this prevented the spread so far as we could by thorough disinfection of excreta previous to their disposal. Within the last four weeks however the smouldering fire has burst into flame.

Dr Woodforde then went on to describe twenty-three cases primarily among the workmen of railway contractor McNeil & Co. and the townspeople. Dr. Woodforde later mentioned the two cases in his own household. Woodforde said that he believed that the navvies came into the district already ill and easily spread the infection. He went on to blame a navvy camp at Hawkesdale, where water was drawn from a swamp which they also found a convenient retiring place when nature called them. The same thing has occurred in a smaller way at Purdeet.

On 16 May Dr. Woodforde wrote to the Shire Secretary Clarence Dufton that: the normal service for collecting the closet pans (except Kemps household) could resume as the fever seems to have ended. The same day Martha Charleston aged 27 from Gaston Kemps household was reported as having Typhoid fever – duration seven days.

At the end of May Francis Underwood was cleared of the infection and Mrs Harris a convalescent of Typhoid was cleared to sell milk to the public. A week later two more cases appeared; Miss Minnie Aitken aged 25 and Mrs W Ross aged 36 of Boram Boram. Nine days later young Alexander Ross aged 5 was struck down, then Elizabeth Anne Ross aged 7, Margaret Ross aged 9 and Ross Davidson Ross aged 11.

Then on the 18 June a report was lodged of another death, Francis Frederick Brimarcombe aged 23 who lived in a farm house two and a half miles from Glenthompson. Dr. A. Bennett was the attending physician.

On the 21 June Medical Officer for Health again reported to the local Board of Health. Dr. Woodforde stated that Typhoid Fever still remains amongst us and noted the fatal case at Glenthompson. Four cases had lately occurred in his own practice, one at the Tannery and three in one family. Dr Woodforde also made strong comments against the local Inspector of Nuisances, Constable T. Hall, who was calling the fever by its mild name Colonial Fever and not Typhoid. He then reported on the Ross family; with regard to the Ross case it is extremely difficult to trace any adequate cause for the origin of the disease. Mr Ross lives in a wooden house of moderate age about a mile out on the Hamilton Road. The land around is swampy in character but the house is built on an elevation and fairly drained and dry. As usual there is no ventilation below the house except such as deleterious and caused by the difference in external and internal temperatures producing upward currents. The water supply is collected from the roof into tanks. The premises are in a clean and orderly condition, but there is a very strong mousey smell all over the house. This unfortunately can not be avoided as it is entirely being to the plague of mice with which the whole neighbourhood is at present visited.

The Ross family were the last victims of the 1890 Typhoid epidemic. With over thirty cases Penshurst was fortunate to only record a couple of deaths which is below the average of 12% of deaths from Typhoid. This may have been due to Penshurst having two qualified doctors in the township, Dr. Frank Arthur Sweetnam (pictured left) and Dr. Sidney Ridout Woodforde.

NOTE: Neil McNeil & Company had interests in Jarrah forests in Western Australia. Large numbers of Jarrah railway sleepers were imported through the port of Warrnambool. Around this time in Western Australia two fevers were running: Gold and Typhoid. Was the outbreak in Penshurst linked in any way to the infamous epidemics of Western Australia?

At the time of the Typhoid Fever Penshurst had two tanneries, each of the two butcheries had their own slaughterhouses on the outskirts of the township; no septic tanks systems only outhouses and numerous bluestone quarry holes which were filled with night soil, dead animals etc. In addition horses, cattle and other stock roamed the streets. It would have been a very smelly place.